Over 10 years we help companies reach their financial and branding goals. Engitech is a values-driven technology agency dedicated.

React Native vs Flutter is a hot topic these days and many people need assistance in choosing the right framework for their app. React Native and Flutter are currently the two most popular frameworks available for cross-platform mobile application development. The two juggernauts are developed by Facebook and Google, respectively.

In this blog post, we will compare react native and flutter, discover what makes them so special, and explore why they are highly recommended by developers.

Here is what we will cover in this blog post:

What is React Native?

It is an open-source JavaScript framework that is used to build applications on different platforms such as iOS, Android, and web apps while using the same code base. It has brought its all glory to mobile application development since it is based on React.

React Native was created to make it easier for developers to reuse code on both the web and mobile platforms. App developers won’t have to start from scratch when building the same app for iOS and Android due to React Native. They can instead utilize the same code for all operating systems.

Flutter is an open-source software development kit. It has made it simple and easy to develop cross-platform mobile applications. It lets developers build high-quality native applications for both platforms without individually developing the code for the iOS and Android apps. One codebase will do for both platforms.

React native and flutter share many similarities, but there are quite a lot of differences in both frameworks.

For starters, react native uses the JSX language while flutter uses DART language. Both languages are based on C-style syntax and they follow the object-oriented principle. Having this commonality, react native and flutter are basically similar in terms of their design and their code is also similar.

In terms of documentation, both frameworks have great documentation guides, which make it simple and easy for the developers to start building applications. The documentation in flutter is easy for reading because of its nice format, structure, and details.

A significant difference between react native and flutter is found when it comes to programming languages. By nature, JavaScript is versatile, which helps developers to change the values of the different data types. It makes JavaScript dynamic.  In comparison, Dart language is static and dynamic which allows the developers to have the best of both worlds. Static type language is considered safe because developers have to use the correct data type. For instance, programmers cannot assign a number to strings without returning an error.

React native apps have a runtime environment of JavaScript, and they have a bigger build size usually. ProGaurd and Hermes are used in react native to reduce this size.

In the case of layout, react native uses JSX and JavaScript for constructing the user interface while flutter uses the widget style. Widgets in flutter are pre-made, and developers do not have to create their custom widgets unless they want to create them. They do not need to worry about compatibility issues because these widgets are created by Google and are also tested by Google.

If programmers are using swift language for the development of mobile applications, they typically cannot see the code which Apple has used for creating the user interface components like buttons. But, in contrast, they can see codes for flutter widgets and see how google developers have created them.

Both react and flutter use CSS Flexbox for creating layouts, the way of implantation is different in both frameworks. The developers who know Flexbox, do not find any problem in building the layout for their application.

At the time of writing this blog post, react native is more popular than flutter, due to its association with the web framework. Its user base is also larger because it has been around for a longer time period than flutter. Therefore, there is a slightly higher demand for react than a flutter, but, it does not mean that flutter is not popular. In fact, flutter is continuously gaining popularity over time.

A plugin with code helpers in flutter is there in the android studio that makes it easier to build and debug the code. As of this blog post writing, there were 12 million downloads of this plugin, which shows the popularity of flutter.

It is quite harder to decide which framework has better performance. There are various factors to consider like a codebase, type of app, app size, animations, layouts, transitions, data processing, phone type of the end users, etc.

Both react native and flutter are open sources and free to use. Since both are created by tech giants Facebook and Google, so both are very well maintained. Developers can test applications using both frameworks either using their built-in simulator on their computer for android and iOS or natively on their phone.

If a programmer is developing an iOS application, the SDK is just available on Apple devices. So, the Linux and Windows users are here out of luck. But android applications can be developed on any platform.

Hot reload is a great feature offered by both frameworks which makes development efficient because developers can see the change instantly.

React native is using JavaScript bridges for communication with native code, and this bridging can slow down the performance of the application. On the other side, flutter uses Dart which complies directly with C, and it is as close to native as one can expect. Flutter codes do not need any bridges for communication with native codes, so, we can assume that it has better performance than react native.

In order to solve this issue of bridges, new architectures of react native have replaced JavaScript with JSI (JavaScript Interface). It lets developers directly invoke native modules without using any bridge.

It is observed that both frameworks are continuously improving their performance with the support of the community and developers. But as of this writing, flutter is slightly winning on performance.

What should you use: React Native or Flutter?

React Native and Flutter both have their pros and cons, and choosing the right framework will depend on the requirement and the goals of your project.

If the development team already has hands-on experience with JavaScript, building mobile applications in react native is not an issue. However, if you are looking for stability, better performance, and a bit more cohesive environment between the ecosystems, you should give flutter a try.

Bitsol technologies has teams of experts in developing flutter and react native mobile applications. We can equip you with the service you’re thinking about creating mobile (or even web) apps for many platforms at once. 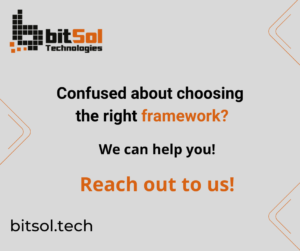 Flutter and React Native frameworks are used by Bitsol Technologies. If you’re interested in such a partnership, please let us know, and we’ll get in touch with you to go through the specifics. 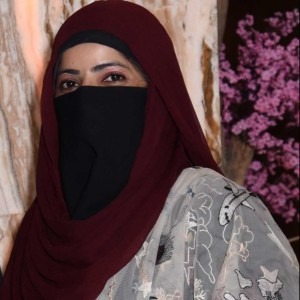 A Brief Intro to Bitsol Technologies

How Bitsol Technologies can help businesses?

Things to Consider Before Choosing the Mobile Application Type

Participation of Bitsol Technologies in the Pakistan Azerbaijan Tech Conference